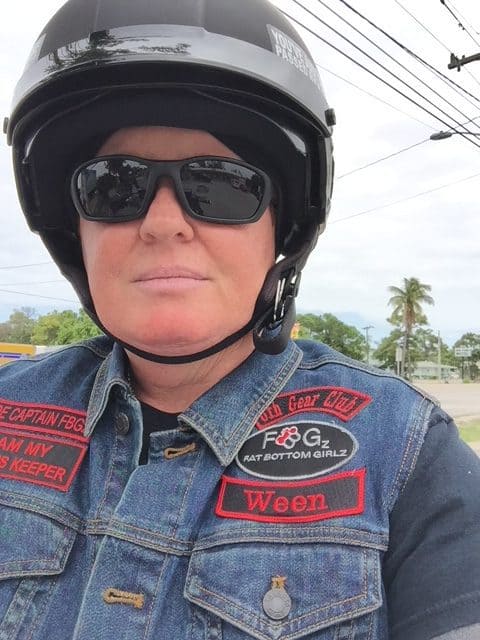 “My first vehicle was a Honda 250 back in 1980. While living at the beach never required anyone to go over 35 MPH, it was the perfect street ride.

Eventually, I got the itch to go “over the ditch” and venture out more. To do so I went through two Honda Shadows and then the first of my three Harley’s. I am currently enjoying the 2016 Road King. I mention this motorcycle progression as we all evolve with our bikes, particularly as we age.

I encourage any and all women to just get out and ride. It doesn’t matter if you have two wheels or three; clocked two thousand miles or two-hundred thousand; are young or old. We are an inclusive group of women! We don’t care what beautiful skin tone you have or your sexual preference. We embrace all female riders to include our trans sisters.”

“Just get on your bikes and RIDE” 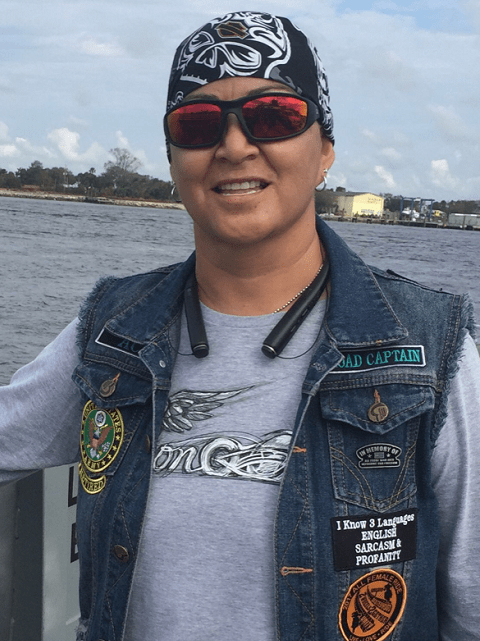 Ace Castillo has been a member of the Fat Bottom Girlz (FBGz) since December 2015. Ace hails from Utica, New York. After retiring from the military, she settled here in Jacksonville, Florida making it her home.

“My first motorcycle was a 1978 Yamaha Special 750. I blackmailed my big brother into teaching me how to ride. At 14 years old, I stood about 4’11” weighing 100lbs soaking wet. The bike was too big for me, and I had to get off the motorcycle at every stop sign and red light to avoid laying it down. Over the years I have clocked many miles on different styles of motorcycles to include the Kawasaki Ninja, Yamaha, and Honda Shadow.

As time passed my choice of motorcycles changed. My current Iron Horse is the 2016 Harley Davidson Fat Boy Lo. I love riding and will continue for many years to come. Safety is always a priority and so are my sisters on two wheels.” 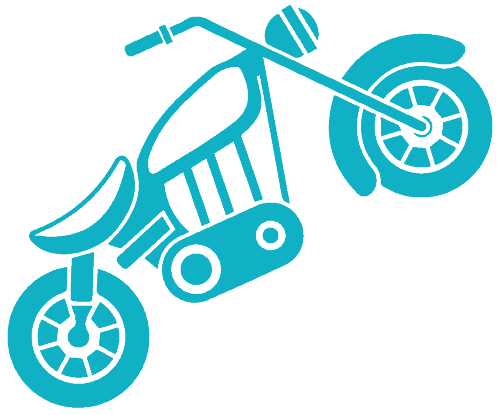 As long as I can remember I have been enamored with motorcycles and that feeling stays with me today. I started riding on 1960’s Italian made bikes, like the temperamental Garelli Cross with the magneto ignition, and the Moto Guzzi. I have since ridden many makes and models, from Japanese, British, German, to American. I have to say my two favorites are BMW and Harley Davidson. Currently, I ride a Milwaukee Eight Harley Davidson touring. I think Harley hit their stride with this new bike. Wow, what a pleasure to ride.

It is so encouraging to see so many amazing women out there riding today. When I obtained my driver’s license and started riding the streets, there weren’t many women riding. In fact, in my town, I was the only one. I would ride with the guys and their attitude was, if you can’t keep up, too bad we’re not waiting. I was determined they were not leaving me behind. In fact, I made it a point to stick to the leader like glue, no matter the speed. Looking back now I realize I did a lot of foolish things, but I also learned many valuable lessons too.

I appreciate the pioneering women who rode before me. They didn’t have the acceptance and encouragement that we share today. There are two women who are my heroes, Bessie Stringfield and Dot Robinson. Bessie Stringfield (1911-1993) made eight solo country trips across America. All at a time when it was dangerous for an African American, let alone, an African American woman to be on a motorcycle. Dot Robinson (1912-1999), one of the founding members of the Motor Maids, helped bridge the way for women to compete in motorcycle racing. I feel that because of these women and others like them, we ride.

Fill out our release form here, or contact us online with any questions. We’d love to have you!

© 2022 Fat Bottom Girlz. Designed & Managed by ViziSites. Terms of Use.

Fill out an application today!

We use cookies on our website to give you the most relevant experience by remembering your preferences and repeat visits. By clicking “Accept All”, you consent to the use of ALL the cookies. However, you may visit "Cookie Settings" to provide a controlled consent.
Cookie SettingsAccept All
Manage consent

This website uses cookies to improve your experience while you navigate through the website. Out of these, the cookies that are categorized as necessary are stored on your browser as they are essential for the working of basic functionalities of the website. We also use third-party cookies that help us analyze and understand how you use this website. These cookies will be stored in your browser only with your consent. You also have the option to opt-out of these cookies. But opting out of some of these cookies may affect your browsing experience.
Necessary Always Enabled
Necessary cookies are absolutely essential for the website to function properly. This category only includes cookies that ensures basic functionalities and security features of the website. These cookies do not store any personal information.
Non-necessary
Any cookies that may not be particularly necessary for the website to function and is used specifically to collect user personal data via analytics, ads, other embedded contents are termed as non-necessary cookies. It is mandatory to procure user consent prior to running these cookies on your website.
SAVE & ACCEPT